You are at:Home»More»Alumni Alliances in Collaboration with Let’s Engage – Inside USC Football

It was a proud moment for Alumni Alliances to partner up with Let’s Engage in their recent Meet and Greet event. The event was organized on 26th June 2019, at the Lab Gastropub, where Jake Olson, a former USC long snapper, teamed up with John Baxter, the current USC Special Teams Coordinator, and Matt Barkley, a former USC Quarterback and current NFL player. The event was moderated by Ryan Abraham, the Founder of USCfootball.com and all the participants shared fond memories and fun stories.

Fans were eager to hear about their favorite players. And especially about Jake Olson, who was now the president of the company, Let’s Engage. A recent graduate, Jake Olson, was visually challenged and displayed a different level of dedication to football.

A cancer survivor, Jake Olson, expressed his wish to see a football match by the USC Trojans one last time before an eye operation in which he lost his eyesight completely. Quite a remarkable man, he studied through college and became the USC long snapper. He started his event company, Let’s Engage, which organizes events in which fans can meet their favorite sports professionals and celebrities. 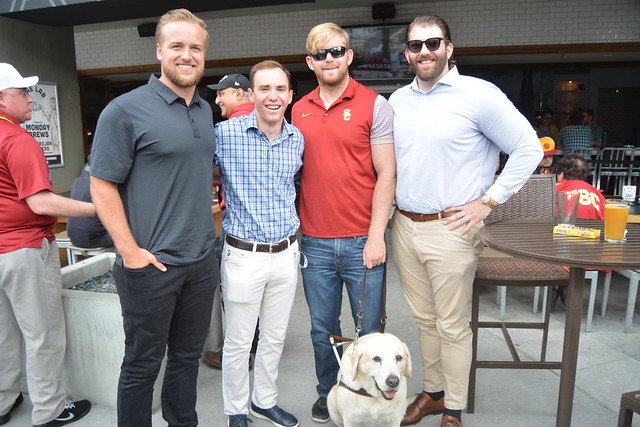 In a touching recount, Coach Baxter shared how there were instances when his team’s and his vision were not the same. At that time, his daughter was 12 years old and was aspiring to become a teacher. He let his 12-year-old daughter give an in-depth PowerPoint presentation outlining the coach’s vision as well as other aspects. And the team respectfully heard her presentation and understood the perspective of the coach.

Matt Barkley shared a rather funny story about Jake and him having a game of golf. He thought that he could easily beat Jake since he was visually impaired. But Jake turned out to be the winner! 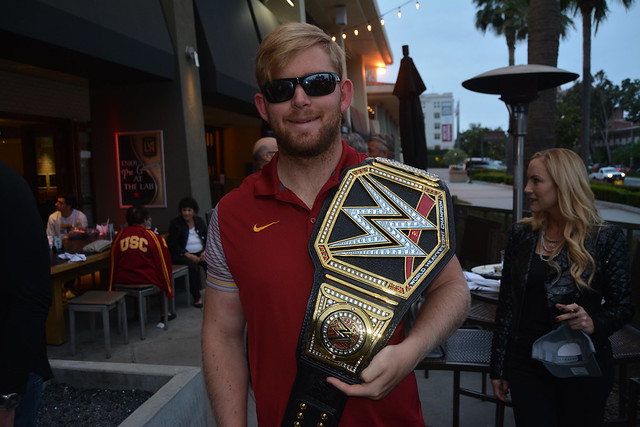 Jake Olson is truly a champion but it was definitely a surprise to all and especially him when he was presented with the ‘WWE Heavy Weight Champion’ belt by Jacob Owen, an Executive of Fox Studios. Jacob Owen was in a soccer accident which led to more serious medical issues. During the low points in his life, he looked upon Jake Olson for inspiration. There was a deal signed between Fox Sports and the WWE Company and Jacob felt that there was no better recipient of the title than Jake Olson. That is truly an honor for a tough Trojan like Jake Olson!

Jake shared some funny stories about how he was annoying Matt by constantly playing a knocking game with another 12-year-old friend while Matt had to prepare for an important game the next day. He also recounted on how it was not a one-time deal for him and the USC Trojans. He was there to stay on. It was truly wonderful to know how Matt Barkley kept leaving voicemail messages and scriptures for Jake to think about.

Jake did not let a setback like blindness to forfeit his dreams. His coach put that belief in him and he was thankful to his teammates, family, and friends.

Adoring fans showered him with so many questions on his life which he answered. It was a successful Meet and Greet. When asked about the upcoming 2019 season, Jake Olson said that he “could feel the hunger in the team”. He also said that there would be tough moments in the seasons but it will surely pay off in dividends.

Alumni Alliances was proud to co-partner in this event. You can also be a part of events like this or if you are planning to organize a similar event then reach out to us for Partnerships and Promotions. Sign up on Alumni Alliances.